Oh, The Weather Outside Is Frightful… So How Are Your Kids Going To Play? 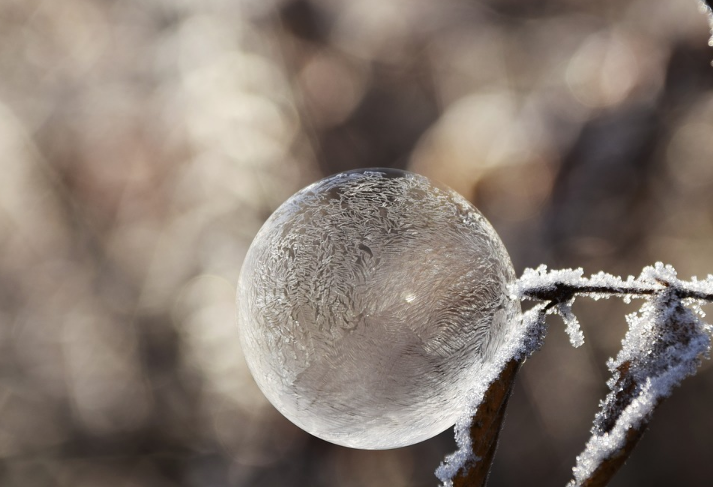 PixaBay Image
No matter how much you enjoy winter and all of the festivities that come with it, it can have its problems.
There’s the basic transport issues for a start. Every journey takes twice as long, thanks to needing to crawl along taking care when there’s ice and snow. There’s more washing to be done thanks to the lower temperatures meaning more clothes being worn. Then there’s the extra costs, both in terms of Christmas gifts and the higher fuel bills as you try to keep warm.
One problematic area which is often overlooked is that of kids being bored.
Summer Sun; Having Some Fun…
There are a few songs written through winter, but far more are written about summer. Summer is a time of outdoor happiness, long days and the warmth of the sunshine on your skin. For kids, there’s no school – do any of us ever recapture that anticipation of the holiday stretching out before us? It’s easy to while away time in summer with a little imagination and hours to dedicated to sun-filled pleasure.
Winter, however, is less helpful in this regard. Winter is more about being cozy; staying still; snuggling under blankets and watching movies. For active children, this is fun for awhile – they can relax, enjoy, play video games without feeling like they’re missing out on something outside. It’s generally tolerable up to Christmas, when the anticipation of gifts and seeing family members sees them through.
When January hits, life gets a bit more difficult. You’re still three or four months away from the good weather returning – and there’s no longer the promise of Christmas to count down to.

This Is The Point When Active Kids Struggle
Do you remember yourself as a child? Were you quiet and introverted? If so, then you might not empathize with the feeling of being trapped indoors by the weather. For you it was probably a bonus, another excuse to stick your head in a book – lucky you!

For many kids, however, the feeling of being trapped inside is – well, just that: trapped. They can’t go out because of a blizzard and it’s made even worse when said blizzard takes the internet service down with it.
They become filled with energy that they have no way of expending. So looking at it as an equation, you’ve got: free time + no outdoors stimulation = nightmare. That nightmare depends on your kids, but sibling fights and general restless chaos are the standard indicators.
You might think that a generation of so-called “digital natives” would be comfortable to spend all day in front of a phone, tablet or TV screen. And for some, that will be their idea of an amazing time – they can while away hours staring at a screen, absorbing information or blowing up foes on a virtual battlefield.
The problem is… should you want them to do that? While there is no evidence that video games are bad for kids or incite violence, they also need to move. It’s better for their health – both physical and mental – and for the family as a whole. So even if they quite like the idea of sitting around doing nothing but stare at a screen all day, it’s probably not the best idea for you to let them. Our kids already spend a frankly staggering amount of time watching TV, for example, so don’t let winter be the cause of that becoming even more extreme!

So, What’s The Alternative?

Returning to your own childhood for a moment, did you ever hear some version of the phrase: “don’t run indoors!”?
Almost all of us did, right? To an extent, you can’t blame our parents. Kids running around indoors is likely to elicit chaos if it doesn’t go to plan. The medium-bad case scenario is broken furniture thanks to excitement taking over the need for preservation. The worst case scenario is a broken child, which all parties can agree that they don’t want.
So you’re left with the impossible situation. Kids need physical activity, but they can’t go outdoors to get it. You – quite understandably – don’t want them running around in the house. So what’s level? Fortunately, there are a few options that you can consider. 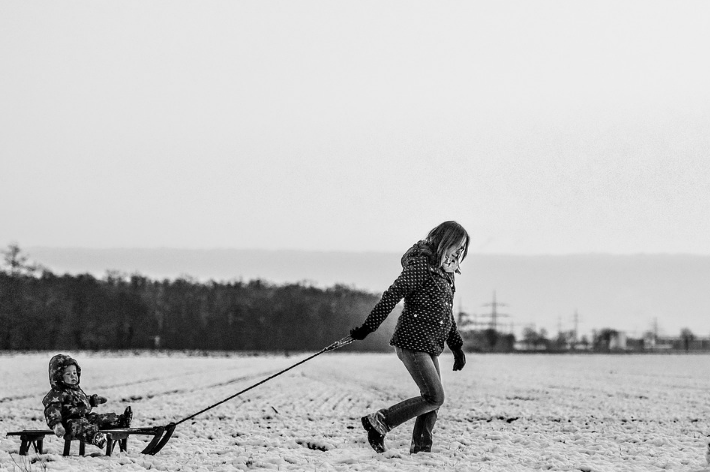 PixaBay Image
Unless the weather is bordering on dangerous conditions – such as a massive storm or Arctic blast – then kids can still play outside. After all, how else are they going to make use of their new duck tape sled?
The one proviso on this is that you should supervise more than you usually should. Many of the winter outdoor activities like ice skating, hockey and sledding all carry more bodily dangers than their summer equivalent. And for obvious reasons, ensure they are wrapped up warm.

Option 2: Allow Play In The House 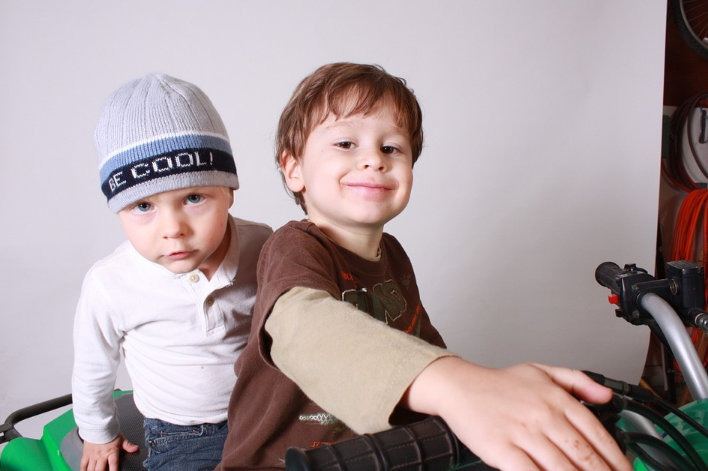 Children are often very physical with the way they play. If you have siblings, they may wrestle one another and generally play rough. Provided both parties are willing participants; then this is rarely a cause for concern.
Try and create safe spaces for various indoor physical activities. You have two options in how you do this. You can push furniture back in a neutral space such as the family room, covering sharp corners and removing any precious ornaments.
The easier option is to make their bedroom play-friendly. It’s a simple process of avoiding sharp corners (you can buy special covers for them) and thinking about furniture. You can find plenty of chair ideas for kids that don’t involve harsh, wooden or metal construction. If you’re handy at DIY, you can even try reinforcing their bed base so that jumping up and down on it is not something they have to be told not to do!
Just ensure they promise they will be careful with any expensive electrical items; you can even move these items to a safe space if you’re particularly concerned.
Option 3: Take Them To The Gym 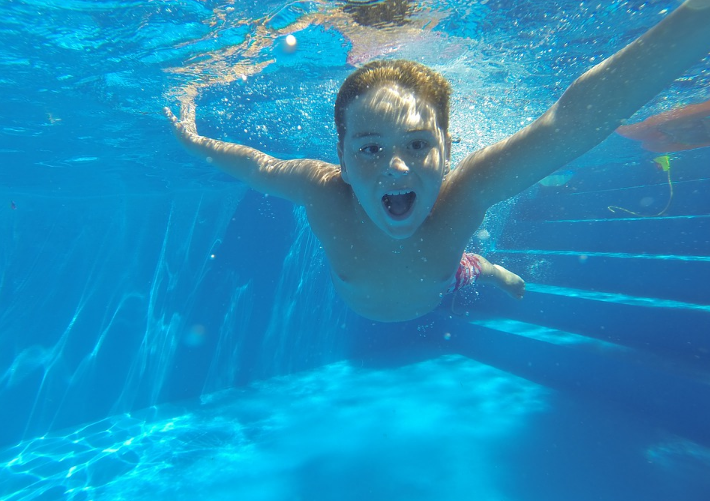 PixaBay Image
If you have a gym membership, you may find that you can bring your children with you for free. At the very least, they will offer a discount rate. While you still have to get there – which is difficult in the worst of weather scenarios – it can be a good option if you’re struggling for ideas.
While your kids aren’t going to be lifting weights (well, some might be…) or running on a treadmill, there’s still plenty they can do. Exercise classes which involve some element of dance or martial arts can be a great outlet and can give you the chance to squeeze in a workout as well.
Furthermore, the pool is always a valuable tool. Just ensure you know when you can and can’t take your kids; many gyms have specific times they allow children into the pool area. It’s important to try and remind your kids not to act as they would in a pool on holiday, too. Some gym-goers will be going for their weekly workout; they don’t want to be disturbed by dive-bombing preteens! 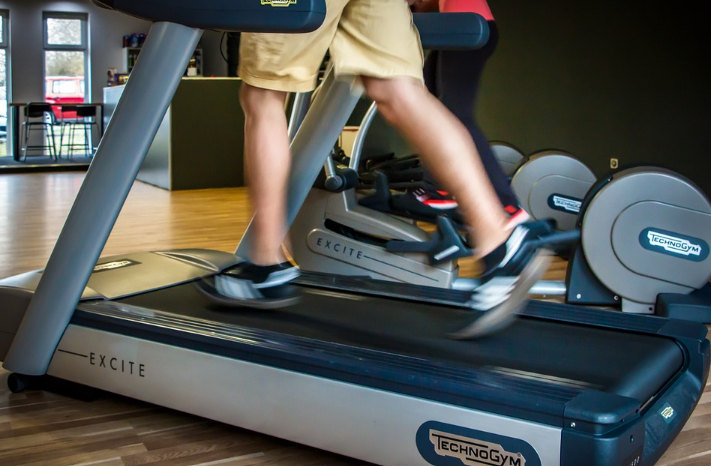 PixaBay Image
We think of exercise equipment of being something in the realm of adults. And, if we’re realistic, not particularly well-used equipment either. There’s many a trope about how we buy these items and never use them – but they might just be your saving grace through the colder months.
With their short attention spans, the idea of running on a treadmill or cycling to nowhere is unlikely to appeal to your child. Instead, make it a competition or incentivize success. You can’t convince them of the benefits just by talking about how exercise lowers stress and keeps your weight down – the words will glide right off of them. But they can grasp a simple work and reward program such as: if you do ten minutes on the treadmill, I’ll let you watch TV for an extra half an hour.
If you don’t already own some form of equipment, then it’s not worth purchasing just for this purpose just yet. You need to know if your kids are going to accept it, so consider other ways of letting them try it out before you buy. If you have a friend or family member that they can visit to try it out, then snap up the opportunity.  You can also consider a standard rental, though it’s likely to be more expensive than just buying a cheap piece of kit up front. It’s a big investment, and these items aren’t marketed to kids for a reason – but you never know, they might love it!

For much of winter, you will be confronted by this same problem. It’s not a simple one to breakthrough, but one of the above should be able to provide some relief from the situation. At the very least, if it all goes wrong and you still end up with a house of frustrated kids – at least you can tell yourself that you tried! Spring will roll around again, and you can forget about the cooped-up feelings that winter inflicts upon us… for another six months or so, anyway.